Kenya should let the ICJ settle its maritime dispute with Somalia

The Kenyan government's decision to engage in a diplomatic escalation against Somalia is likely to backfire. 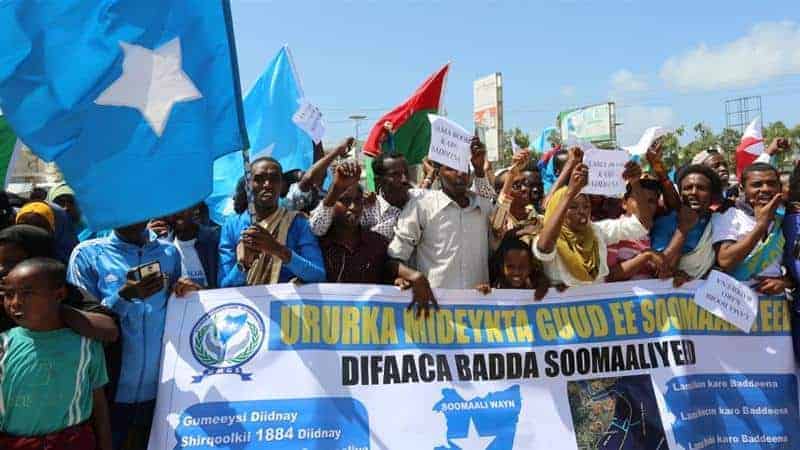 The last three weeks have witnessed a strange diplomatic spat between Kenya and Somalia. The Kenyan government summoned back its ambassador from Mogadishu and kicked out the Somali ambassador, claiming that Somali leadership had attempted to sell off parts of Kenyan territory.

The two neighbours have been locked in a dispute over their maritime boundary, with both claiming a narrow 100,000-sq km triangle of sea shelf thought to contain significant deposits of oil and gas. After five years of attempts by both to negotiate a compromise, Somalia eventually filed a case at the International Court of Justice (ICJ) in 2014, which is still to be adjudicated. However, Kenya has continued to operate as if there was no dispute and has already sold mining licences to international companies in the triangle.

The latest flare-up centres, at least nominally, on proceedings at a controversial public meeting organised in London by Somalia’s Federal Ministry of Petroleum and Mineral Resources and Spectrum Geo, a Norwegian seismic data processing company. The agenda for the meeting was somewhat unclear, with government officials initially suggesting it would be inviting bids for exploration, and only later clarifying that the meeting would present seismic data collected by Spectrum and offer for sale more detailed information about offshore blocks.

This confusion led to Somali citizens living in London storming the meeting to protest against the presumed auctioning of the offshore blocks to foreign investors, a boycott of the meeting by opposition parties and members of Somalia’s Upper House, and then the bust-up with Kenya.

The tone of the statement issued by Kenya on February 16 regarding the summoning of its ambassador in Mogadishu was startling. It fell short of declaring Somalia an enemy state, claiming the latter had indeed auctioned off “oil and gas blocks in Kenya’s maritime territorial area”.

It thundered about a map that had apparently been displayed at the conference showing the disputed territory as part of Somalia, and indirectly threatened to use as leverage “four hundred thousand Somali refugees and asylum seekers” in Kenya.

It also “reminded the Government of Somalia and the international community” of the fact that it had troops serving in the Africa Union Mission in Somalia (AMISOM), which is helping battle the al-Qaeda-linked armed group, al-Shabab. “The patience of the people of Kenya is not infinite,” it warned.

Somalis are a more patient lot it seems. In a measured rejoinder a day later, the Somali government averred that no auction had taken place, explained that the map in question mirrored Somalia’s long-standing position, and reiterated that the country has no intentions to undertake any unilateral actions (of the type Kenya has) in the disputed area until the ICJ renders its verdict.

What accounts for such an overreaction by Kenya? Well, perhaps it could be panic over the possibility of actually losing the case at the ICJ. Clearly, Somalia seems the more confident of the two about its prospects at the court, which is expected to hand down a verdict sometime this year. Somalia has already won the first round after the court in 2017 dismissed Kenya’s challenge to the proceedings on the basis that the two countries had previously agreed to settle the matter out of court.

Further, this is a strategy Kenya has deployed before. The perceived success of its obnoxious and hardnosed campaign against the International Criminal Court’s indictments for crimes against humanity against President Uhuru Kenyatta and his deputy, William Ruto, may have emboldened Kenya to think it can similarly bully its northeastern neighbour.

Kenya is not new to playing the bull in Somalia’s china shop. The Somali government was not consulted in October 2011 when Kenya sent forces across the border, nor when the objectives of the invasion morphed from pursuing kidnappers to taking southern Somalia’s second-largest port, Kismayo.

Against Mogadishu’s wishes, Kenyan troops brought former al-Shabab ally, Ahmed Madobe, to power as president of the newly created Jubaland State administration. The country ignored a resolution of the Somali Parliament calling for its troops to leave. Moreover, the Kenyan forces in Somalia have been accused of engaging in illegal trade in charcoal and sugar, which enriches the very terror group they are meant to be fighting.

According to an article in the Standard newspaper, one of Kenya’s demands for restoring diplomatic ties was that Somalia withdraw its case at the ICJ. This insistence is perhaps most telling of Kenya’s true intentions.

It thus appears that having already sold prospecting rights within the disputed zones to companies such as ENI, Total, Anadarko and others, and facing huge claims for compensation should the ICJ rule in Somalia’s favour, Kenya has fabricated a diplomatic incident to pre-empt that judgment and force Somalia to agree to a negotiated solution.

The Mogadishu is already in a weaker diplomatic position having already angered its international partners at the beginning of the year by kicking out the top United Nations official in the country, Nicholas Haysom. Perhaps Kenya smelt blood.

Such tactics are, however, a double-edged sword. A serious rift with Somalia would have repercussions on Kenya’s participation in AMISOM as well as risk radicalising border communities and legitimising Somalia-based terrorists targeting Kenya. It would also harm the regional cooperation that AMISOM depends on, weakening the fight against al-Shabab and endangering people across the region.

It is thus in everyone’s interest that Kenya dials down its rhetoric and, as The Star editorialised, commits to abide by the decision of the ICJ.

Patrick Gathara is a communications consultant, writer, and award-winning political cartoonist based in Nairobi.