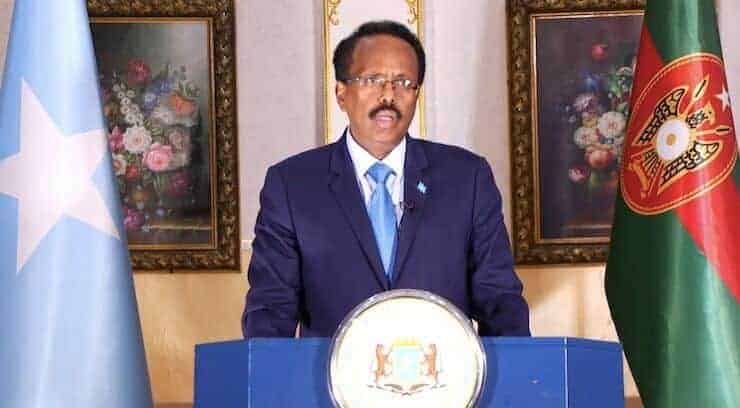 Farmaajo, in a video announcement, said he wanted to make sure the elections are completed.

This backing was important because he and the PM had appeared to pull apart on who should be in charge of Somalia’s executive powers, and especially on security, as the country discussed what to do with the unfinished polls.

For three days, Roble had been meeting stakeholders in Mogadishu. On Sunday, he and the five federal state presidents issued an eight-point declaration indicating the parliamentary elections should be completed by February 25, more than a year after the initial deadline.

But that declaration came just 10 days after Farmaajo said Roble had failed in conducting elections. In fact, Farmaajo had suspended the PM, who then defied him.

Farmaajo spoke on national TV and urged the leaders of the federal member states to accelerate the elections in line with the communiqué issued on Sunday, following the National Consultative Council (NCC) meeting chaired by Roble in Mogadishu.

“I urge you to implement the election timeline agreed by the NCC,” the president stated.

He referred to the document jointly signed by Roble and the five regional presidents, stating that the ongoing indirect parliamentary elections should be concluded between January 15 and February 25.

Farmaajo cited the importance of Somalia’s armed forces and their role in securing the country, admiring the courage demonstrated by the uniformed personnel in defending the country.

“I commend the self-sacrifice of our forces in confronting the terrorists that are committed to spill the blood of our people and the destruction of their properties,” he stressed.

The president cited an ongoing plan to complete the Somalia Transition Plan (STN).

“The Somali Transition Plan is progressing towards its final stages to ensure that the overall security of the country is going to be transferred from the Amisom (the African Union Mission in Somalia) to the Somali armed forces.”

The president underlined that under his administration, Somalia’s foreign policy had been based on cooperation and bilateral respect.

“We geared our foreign policy in a way that ensures cooperation, bilateral respect that guarantees the honour and independence of our country that has led Somalia to play significant international roles,” Farmaajo remarked.

Earlier on Monday, the Coalition of the Presidential Candidates (CPC) – a grouping of over a dozen top opposition political leaders led by former president Sharif Sheikh Ahmed – welcomed the elections agreement reached by the NCC on January 9. They pointed at the importance of the implementation of the accord’s terms.

Just before the NCC meeting in Mogadishu, Farmaajo was at loggerheads with PM Roble to the point that the latter accused the president of orchestrating a ‘coup’ against his office on 27 December, which Villa Somalia, the state house, denied.

Through the speech, Farmaajo minced no words in commending the premier and the state leaders, urging them to continue the work of keeping the Somali people united.

Many media outlets in Mogadishu indicated that Farmaajo’s speech was conciliatory, sounding like the beginning of his campaign to regain his seat in the upcoming presidential contest.

If the election timeline, scheduled to be completed by February 25, is realised, Somalia’s bicameral parliament (54 senators and 275 MPs) is expected to vote, in a joint session, for President.

On Monday, the United Nations hailed the consensus reached by the political leaders.

The UN envoy to Somalia, James Swan, said in a statement: “The UN encourages Somalia’s political leaders to continue in a spirit of cooperation, (and) avoid provocations that risk new tensions or conflict.”

He encouraged them to stay focused on delivering a credible electoral process quickly for the benefit of all Somalis.