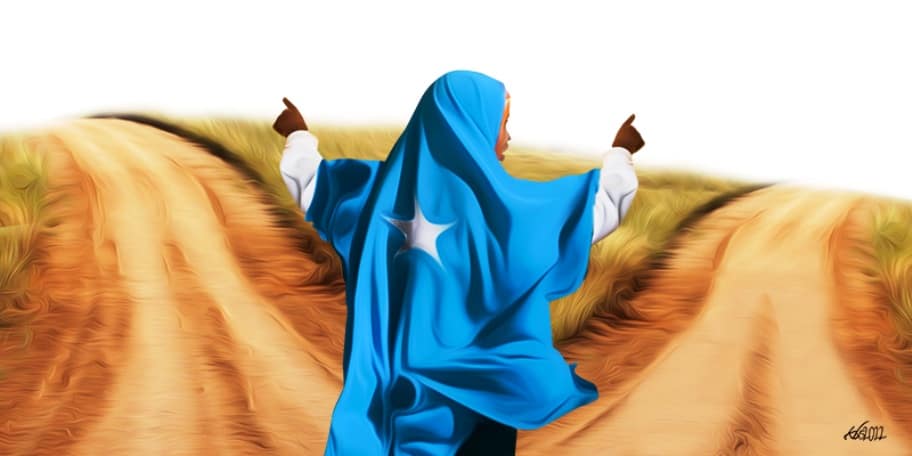 Somalia has been at a crossroads in recent years, with one pathway leading towards forging state-building and re-establishing democracy and another threatening a regression on the substantive gains made on many fronts.

Narratives of Somalia’s growth and potential fronted on social media by ordinary citizens and returning diaspora are contrasted by conflict and frequent attacks on civilians by armed non-state actors. These attacks have claimed the lives of innocent civilians, including many talented youth and diaspora returnees, many of whom chose to trade in a comfortable life for a precarious one to bring back skills to their home country. Many Somalis who have returned from the diaspora engage on social issues, telling powerful stories of Somalia’s potential on social media.

However, the security situation is causing disillusionment among citizens and observers alike and, over time, the narrative of resilience is being replaced by increased demands for accountability. On the economic front, debt cancellation by the World Bank is a notable milestone that has brought the state closer to regaining access to financing from global institutions.

For example, armed clashes between the Somali National Army and Jubaland state forces broke out in February 2020, with the heightened tensions culminating in more intense fighting in January 2021 that claimed the lives of over 20 civilians and led to the displacement of many others. The Somali government has accused Kenya of meddling and harbouring hostile forces, a claim the government of Kenya has refuted.

The Jubaland conflict, coupled with a maritime border dispute at the International Court of Justice, forms the backdrop of an enduring diplomatic rift between the two neighbouring and interdependent countries.

Continued attacks by al-Shabaab in the country, and particularly in the capital, have called into question the role of the African Union peacekeeping force in stabilizing Somalia. The armed extremist group still controls some parts of Somali territory.

The “ungoverned” spaces that remain in the control of al-Shabaab pose the single biggest threat to the country’s stability. The African union-backed force and the Somali Armed Forces have faced a difficult mission in liberating towns from the hands of the militant group.

The presence of international troops in some parts of the country keeps the group at bay but, with the current security architecture, it is a seemingly herculean task to keep the group from taking over locations with a power vacuum in the long-term. And while some domestic actors have been calling for the withdrawal of AMISOM forces, if not well planned, their departure could have catastrophic consequences; stabilizing Somalia against the backdrop of a haphazard withdrawal will be untenable.

Continued attacks by al-Shabaab in the country and particularly in the capital have called into question the role of the African Union peacekeeping force in stabilizing Somalia.

The withdrawal of United States troops from Afghanistan and the ensuing chaos has reignited the debate about the utility of militarized foreign interventions in stabilizing countries in conflict. But while the historical contexts of Afghanistan and Somalia are different, there are parallels to be drawn and lessons to be learned. In international law, there are limited circumstances in which foreign military interventions are sanctioned to enforce the “right to protect”.

The principle of jus cogens comes into play when protecting civilians overrides state sovereignty because a state is unable or unwilling to protect them, for instance, in the context of genocide. However, in the new millennium, the US “war on terror” normalized foreign military interventions for counter-insurgency operations and to “liberalize” countries.

However, interventions in Iraq, Libya, and the Sahel have failed to achieve their objectives and have instead led to further instability. The AMISOM intervention in Somalia dates back to 2007 when the troops were given a counterinsurgency task. Its current mandate is mainly under the auspices of Kenya’s war against the al-Shabaab, which has claimed numerous attacks in Kenya. Kenya’s 2011 military intervention was absorbed into AMISOM with a renewed United Nations Security Council mandate in 2013.

The main objectives of the peacekeeping forces from five African countries were to stamp out the al-Shabaab threat, reinforce the role of Somali security forces in providing security for the political process, and peacebuilding with a gradual handover to the country’s forces.

While AMISOM has partly secured the capital and continues to prop up the political establishment in Mogadishu, an evaluation of the performance of the peacekeeping force at a time of the force’s likely withdrawal indicates that the mission is far from having achieved the objectives set out in its mandate.

AMISOM’s mandate, which was extended by three months in December in 2021, will soon expire, and the fate of the mission will be decided in March.

As one scholar argues, the AU mission has been stuck on basics and has failed to create a peace that paves the way for state building. Without control of territory and governance structures at different levels, the security gap remains the biggest impediment to state building. The African Union has proposed a transitional mission with a focus on handing over to Somali security forces.

The European Union, which funds AMISOM, has realized that a purely militarized solution is unsustainable, and even counterproductive, in resolving Somalia’s crisis and has called for changes if it is to continue supporting the mission. On the other hand, the Somali government has rejected an extension of AMISOM’s mandate.

The AU mission has been stuck on basics and has failed to create a peace that paves the way for state building. While Somalia’s crisis appears to be a military question and is primarily dealt with as such, it is at its core an issue tied to the politics of the country and to state building. Any initiative to promote stability and a durable peace should consider local ownership through investment in a Somali-led state-building process.

The election of President Farmajo in 2017 ushered in a new era since the collapse of the state and was the first peaceful transition in the country for decades, and was lauded for the hope for the future that it represented. However, elections that should have taken place two years ago have been delayed by a year, with a gridlock among political stakeholders threatening a potentially dangerous turning point in Somalia.

There were real fears that the country would descend into conflict when political actors mobilized the military to contest power. While negotiations supported by the international community diffused the tensions, what is seemingly a zero-sum and highly fragmented politics keeps the country on edge, as witnessed in this current electoral cycle.

There were real fears that the country would descend into conflict when political actors mobilized the military to contest power.

While significant in the practice of democracy, elections are not a panacea for the problems that face post-conflict states; they can spark new conflict and divisions. To achieve positive progress in Somalia, Somalis themselves, the international community, donors, think tanks, and supporters must rethink the trajectory and the formula for peace in Somalia.

The focus should shift from an international template of peace to solutions that are crafted primarily with and by local actors—peace from below. A mixed approach that considers the contextual complexity, history, and what would work from local perspectives is the way to give peace a chance.

By Amina Ahmed
Amina Ahmed is an international development professional with experience in Kenya and Somalia. She is currently a Rotary Peace Fellow at Uppsala University.