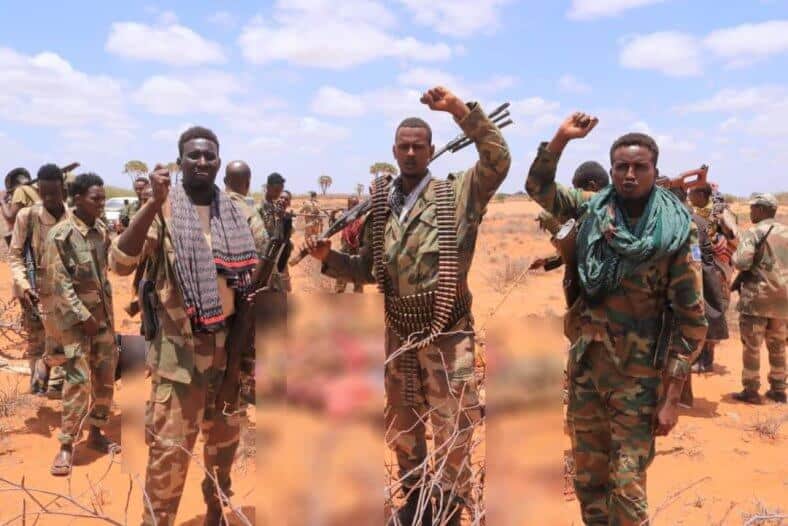 Militia members in central Somalia have helped kill scores of al-Shabab militants in an ongoing operation against the Islamic extremist rebels that are receiving air support from the United States, Somali authorities said.

Suspected Al-Shabab fighters are being hunted in the Hiran region areas of Yasoman and Aborey, and more than 100 had died as of Sunday, the Ministry of Information, Culture and Tourism said in a statement issued Tuesday.

Ali Abdulle, a community leader in the town of Beledweyne said that al-Shabab had made life for residents so miserable they had to fight back.

“Al-Shabab has burned our villages, blown up our wells and boreholes, destroyed telecommunication towers, planted IEDs and murdered civilians indiscriminately,” he said. “So there is no option left except to face them.”

After taking office in May, Somali President Hassan Sheikh Mohamud vowed an offensive against al-Shabab to dislodge the group from large parts of Somalia it has controlled for years. Mohamud then declared “total war” against the al-Qaida-linked rebels following a deadly attack on a hotel in Mogadishu last month.

Al-Shabab spokesman Ali Mohamud Rage acknowledged the government’s uncompromising stance in his comments during a ceremony to graduate militants that were filmed and released Saturday. But he insisted al-Shabab was undeterred.

“Stick to your oath and know that we will not back down. Stand by your words, and we will stand by ours, and we shall see which one of us is left standing,” he said. “We ask Allah by his grace and mercy to grant us swift victory over the disbelievers and their allies.”

The government appears to be seeking and receiving, help from one notable militia. The clan-based group known as Macawisley has for years clashed with al-Shabab. Its latest uprising was sparked by alleged al-Shabab brutality that includes the looting of livestock, said Samira Gaid, executive director of Hiraal Institute, a Mogadishu-based security think tank.

“It is always the people who bear the brunt of the excesses of rule under al-Shabab and they don’t enjoy popular support,” she said. “Some populations who aren’t as armed are not able sometimes to take up arms against the group. But others are better equipped and are stronger politically to stand up against (al-Shabab) rule.”

Gaid warned that for an uprising by locals to be effective, “government support logistically is critical.”

Omar Abdi Jimale, a Mogadishu-based political analyst, said the government supporting militias to fight al-Shabab could be decisive after the authorities’ previous reluctance.

“Clans were unable to carry on protracted fighting because of the absence of official government support. As a result, their uprisings ultimately were ending up in signing a peace deal with al-Shabab,” he said. “The previous administration had the chance of providing direct support to the revolting clan militias without directly equipping them, but by not doing so gave al-Shabab a chance to consolidate their control over revolting clans’ territories.”

Forced to retreat from Mogadishu in 2011, al-Shabab has slowly made a comeback from the rural areas to which it retreated, defying the presence of African Union peacekeepers, as well as U.S. drone, strikes targeting its fighters.

Al-Shabab, which opposes the federal government and the presence of peacekeepers and other foreigners on Somali territory, has seized more territory in recent years, taking advantage of rifts within the Somali security service and disagreements between federal authorities and regional leaders.